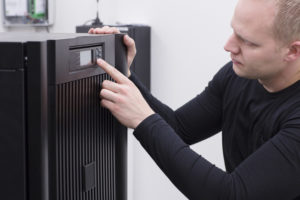 While detention control systems are primarily concerned with the control of locks, intercoms, and cameras, there are secondary systems that provide monitored inputs that can be useful in the overall integration of the system. For example, most detention control systems are powered using an Uninterruptible Power Supply (UPS). Even though these devices provide a smooth transition from main power to generator power, their supply is not endless. So, it is a useful piece of information to know when the main power supply has failed and the system is currently running on battery backup. Along with this type of interface, other systems, such as Video Surveillance Systems, also provide means of alarm monitoring for such events as hard drive failures or device overheating.

Because of the great benefits that standards-based interfacing affords, MTI is excited to announce that we have just implemented a new feature in our ProVision Detention Control System which allows the integrator to monitor the status of many different types of third party devices through the implementation of an international standard known as Simple Network Management Protocol (SNMP).

The great thing about SNMP is that any device which implements it provides a set of “objects” that can be monitored by other devices or applications on the network. These “objects” are effectively properties within the device. For example, the current power status of an UPS (online, off, on-battery, rebooting, etc) might be exposed as an “object” to SNMP. Any application that can read SNMP objects can receive the current status of the device.

MTI’s ProVision Detention Control System can now monitor these SNMP objects to alarm based on change in status. With the use of a background utility, the MTI control system can either log the change in status to the activity log which is already logging all other events on the system, or the same utility can be configured to activate a point on the MTI Embedded Controller (EC). From that activated point, the EC can perform some logic and integrate that alarm into the larger security apparatus of the control system.

MTI is the most open and standard-based detention control system on the market. SNMP is just another international standard, along with Onvif Profile S, BACnet/IP, and various serial interfaces that MTI provides for the integration of third-party devices into one seamless integrated control system.